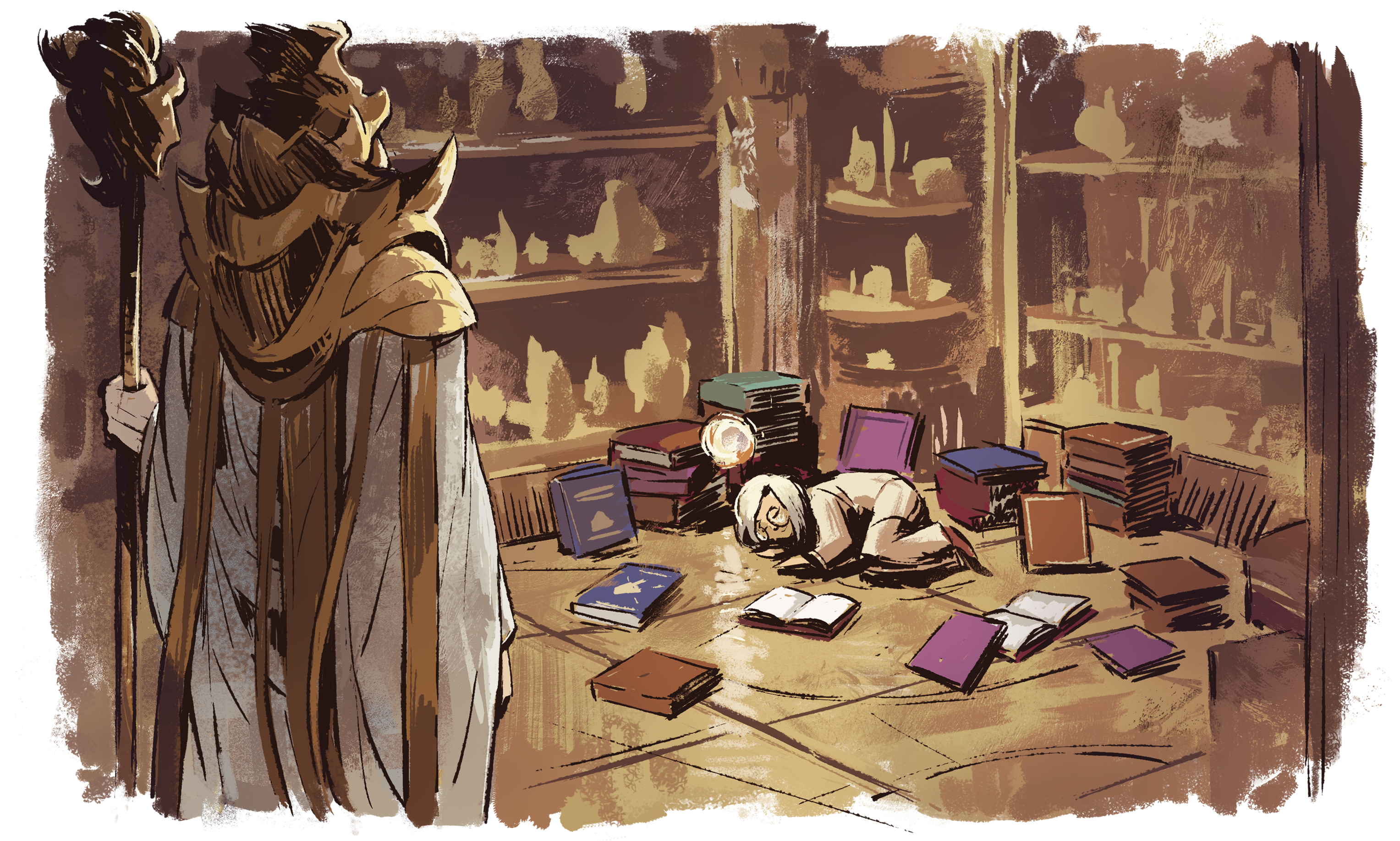 Deep within the Library of Illumination’s innermost sanctum, a Magister came across a young child. Small and silent, her pale blonde hair glowing in the lamplight, she was at odds with the ancient tomes and hidden secrets which surrounded her; yet in spite of her mysterious appearance within the Signarus, she appeared to be entirely ordinary. Nevertheless, the Magister struggled to make sense of the strange young girl.

The child remembered nothing, whether about herself, her past, or her origins. The only clue to her history was the glowing sphere she carried, an ancient relic which baffled the Magisters of Solana. It contained a single, pristine drop of arclight - one of the rarest and most revered gifts of Sol. Light made corporeal, it represented the very essence of the knowledge and illumination of the Light, condensed into a tangible form. No one could explain how a child might have come to possess such an illustrious and powerful relic. And like the child herself, its origins would remain a mystery. 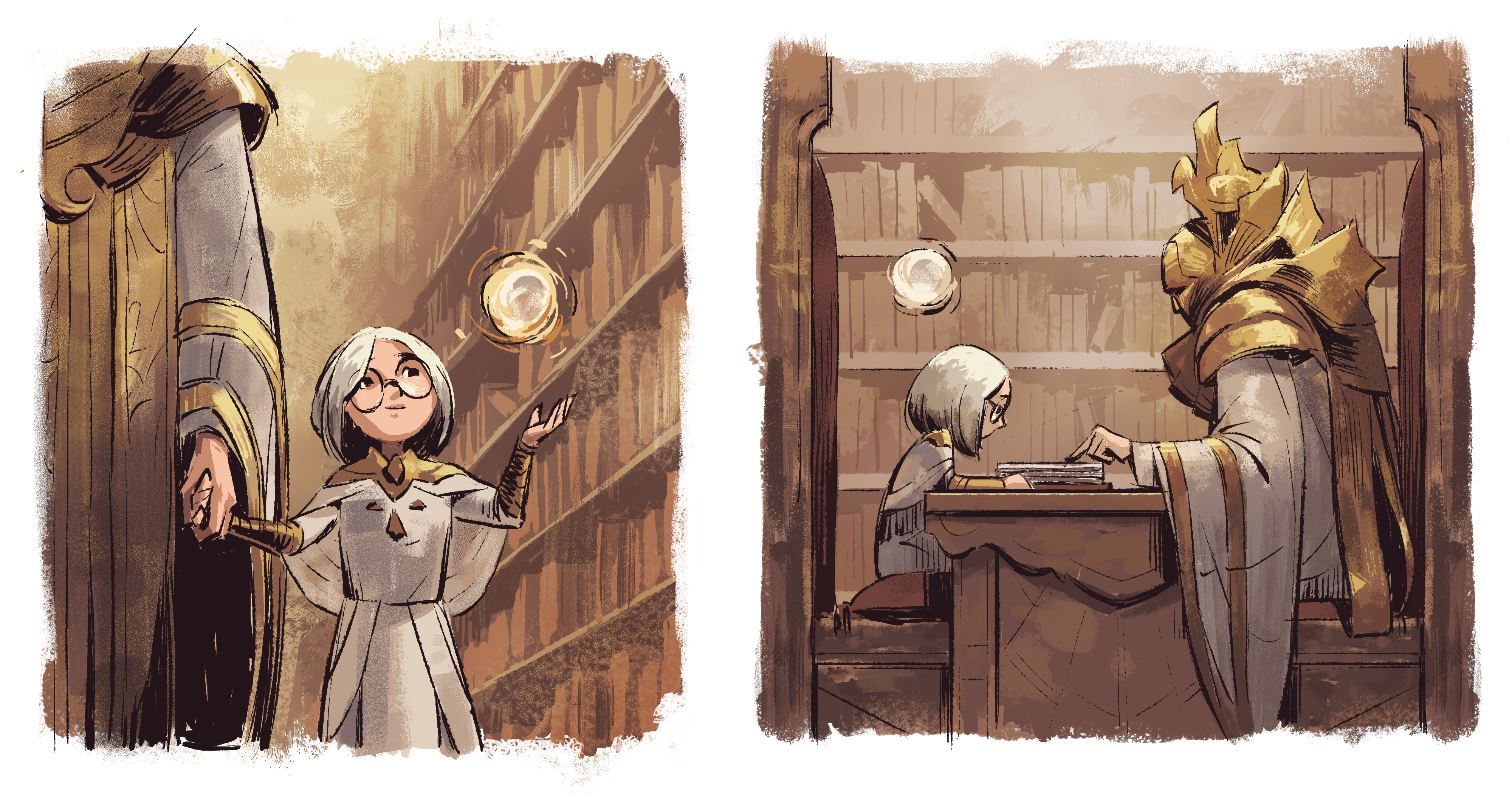 Prism began her education in the vaunted halls of the Great Library itself. Brought under the Magister’s wing, she was taught the history of Solana, and trained in the ways of the Light. When she wasn’t studying with her instructors, or learning about her newfound home, she would scour the Library’s labyrinthine shelves by herself, diving into an endless sea of books, illuminated scrolls, and ancient tomes. From the ‘Night of the Dark Tide’ to ‘Legends of the Flow’, ‘Battle of Eventide’ to ‘The City of Copper’, Prism explored them all, reading about the lands which lay beyond the city walls, memorising their passages until she could recite them by heart.

With the Library of Illumination as her home, Prism felt deeply at peace within the city, as she had been welcomed by the people in spite of her mysterious origins. Her childhood was one of happiness and joy, spent amidst the endless halls of the Great Library, the verdant gardens of the Silvarium, and the streets of the city districts, sharing her favourite tales with anyone who cared to listen. 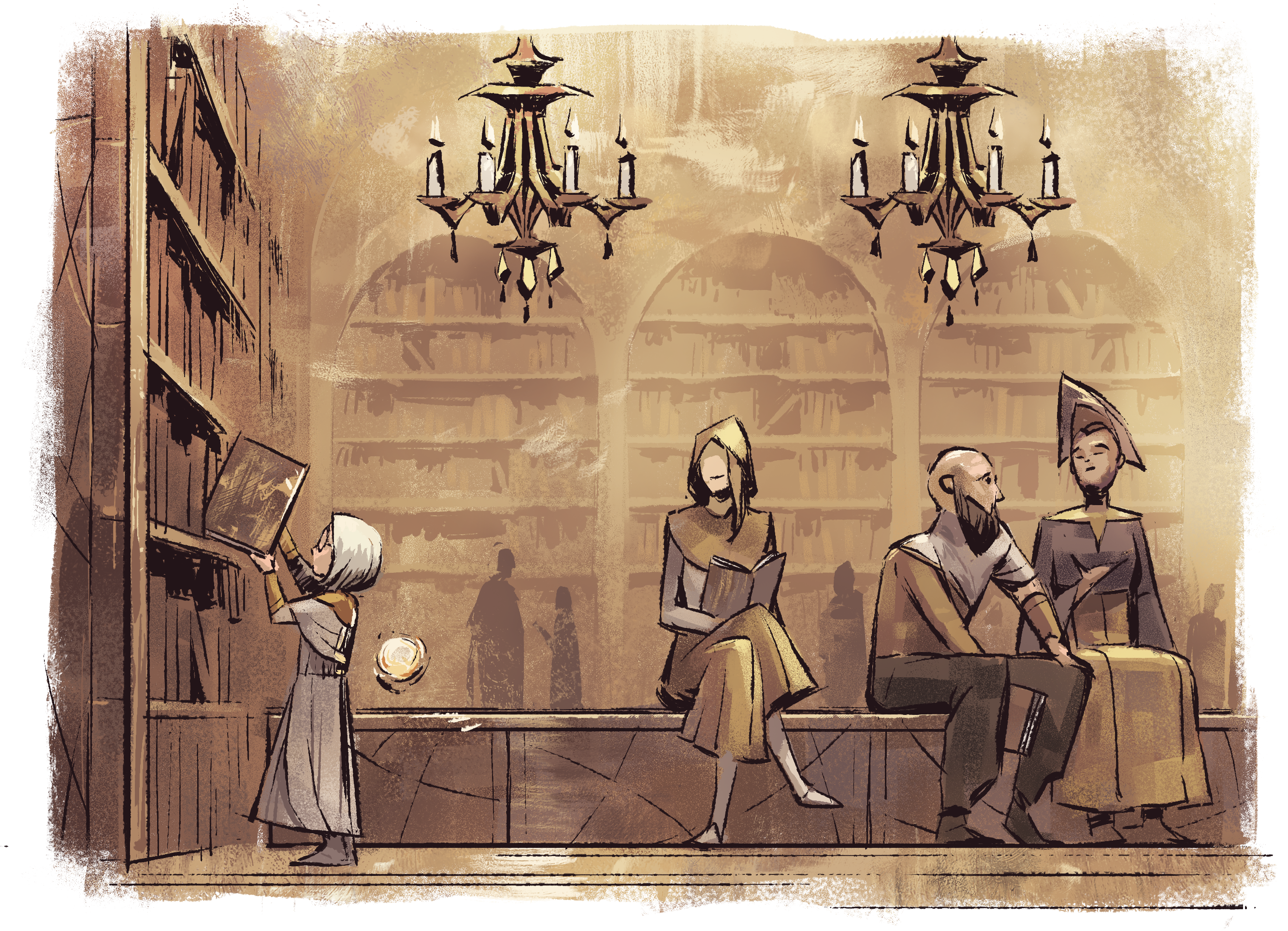 It came to pass that, as Prism was exploring the Library’s halls, she came across a series of old tomes, her fingertips disturbing the almost tangible layer of aether that coated their filigree spines. When she picked up the first volume, the light revealed the seal of the second Grand Magister upon its cover, the pristine gold insignia gleaming softly. She opened it eagerly, turning her gaze to the stories which lay within. It was then that Prism uncovered the tales which would change her life forever.

The tales of Aegis, radiant and shining, who shelters the city within her wings. The tales of Suraya, shrouded in mystery, who brings knowledge to the people. Of Themis, righteous and true, who balances the scales of justice and retribution. Bellona, blade of courage, who fights for the good of all. Sekem, devourer of evil, whose righteous fury blazes through the Shadow. Victoria, triumphant and glorious, who snatches victory from the jaws of defeat. Avalon, healer of all ills, whose light rejuvenates the land. Metis, the steadfast steward, who guides her people through times of darkness. 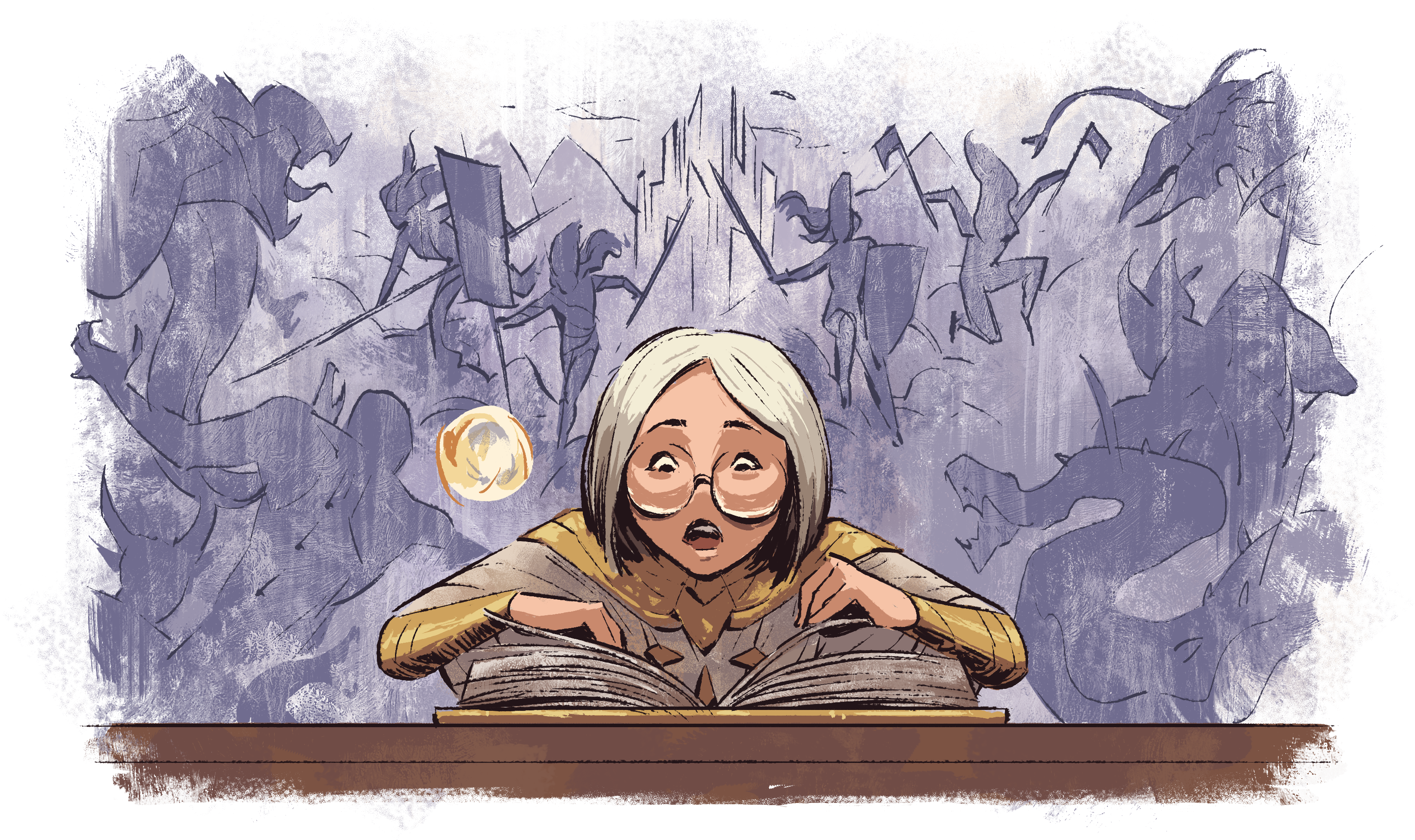 Prism pored over the ancient tomes for hours, engrossed by their illuminated script and small, elaborate illustrations, depicting the Heralds who so nobly cared for the city of Solana. They came to the city as emissaries of Sol, bastions of the Light, who worked to better the lives of all who dwelt within Rathe. Yet, when Prism spoke of the Heralds to others within the Library, no one recognised their names. Inspired by their tales, she endeavored to share the Heralds with all her people, and bring their names into the Light.

As Prism grew in years and in stature, her connection to the Heralds grew ever stronger; most especially Suraya, who personified Prism’s own passion for knowledge and learning. Then, one calm summer’s day, something extraordinary happened. The ancient relic she carried awakened, illuminating the space around her as it transformed into a masterwork. The Magisters took this as a sign of Sol’s grace, and at their urging, Prism decided to utilise her talents and her newly transformed relic, and take up the mantle of an illusionist. 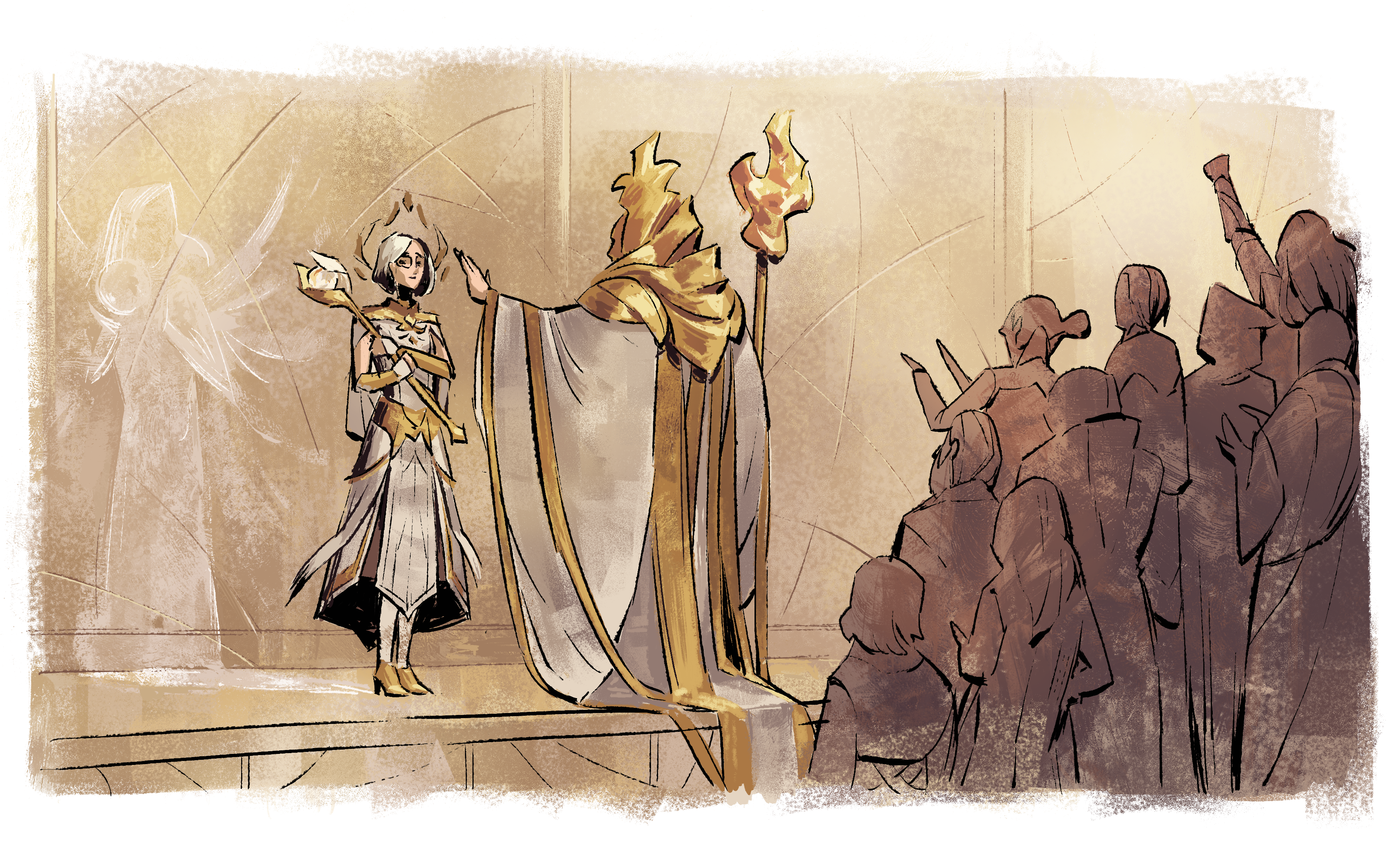 Flourishing under the guidance of her tutors, Prism’s gifts for wielding the Light quickly became apparent; her talents and skills growing ever more powerful with each passing day. Her love for stories were woven into her illusions, bringing her beloved tales to life. She recreated both magical beings and creatures from distant lands, creating glowing spectres to delight the children who came to the Library, or enchanting her older visitors with the heroes of legend.

But before Prism could take her illusions into the Golden Fields, a horrific tragedy befell her beloved city. Shadows covered the horizon, a dark fog flooded the city streets, and fiendish creatures materialised beneath a sunless sky. Solana found itself in the midst of war after centuries of peace, and Prism was forced to watch as her people cowered in fear, terrified of the creatures which had erupted through the front gates.

In this time of unimaginable terror, the people of Solana desperately need something to believe in. Prism is more determined than ever before to bring hope to her people, protect them from harm and show all of Rathe the way of the Light. Summoning the likenesses of her beloved Heralds, she shall call down the very heavens, creating illusions which will inspire her people and smite her foes. So long as she stands, Prism will never stop believing in the power of a good story. 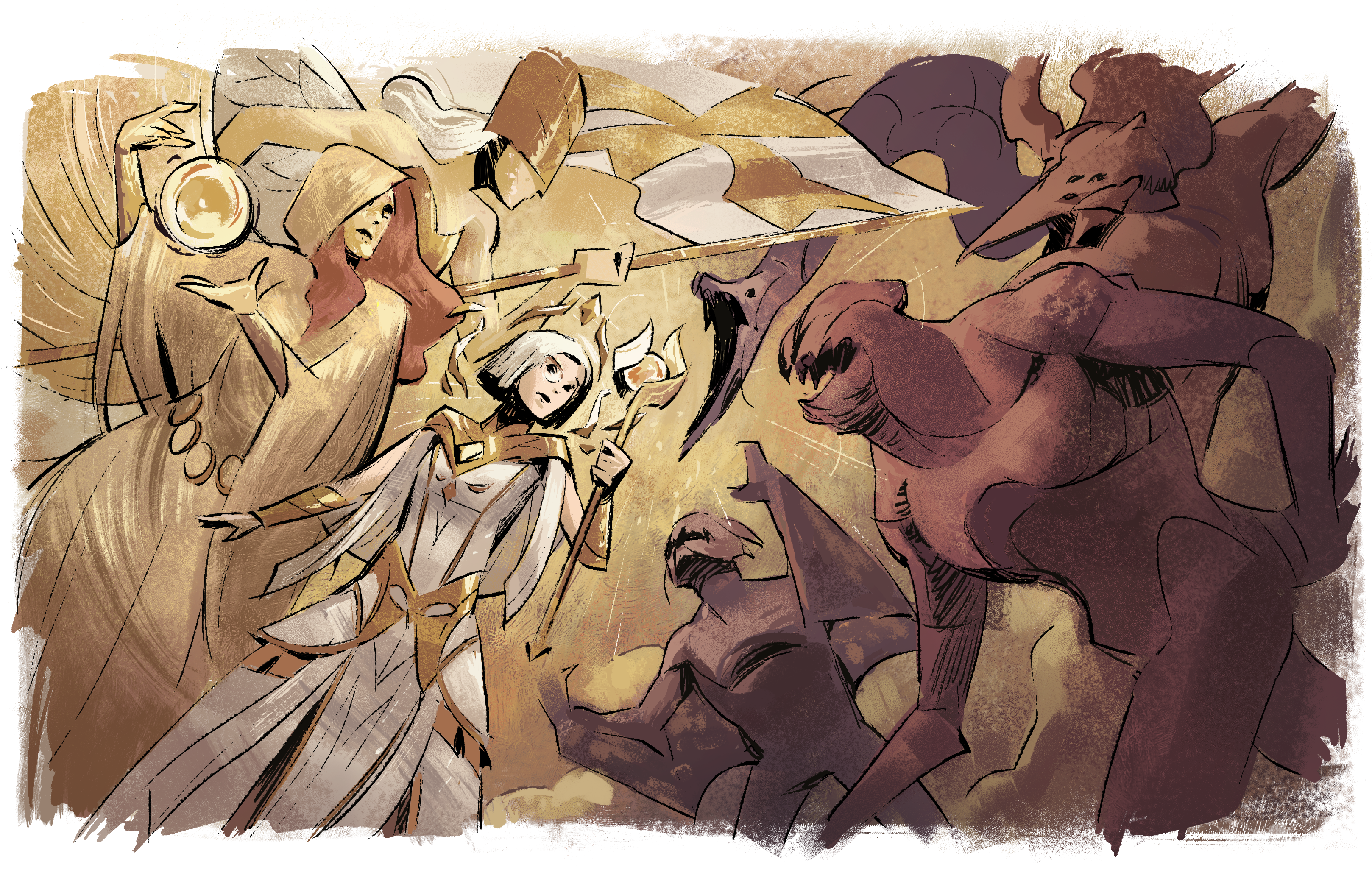