In a golden city devoted to the pursuit of knowledge, a small group of scholars worked within the grand library, toiling over ancient records and illuminated tomes. However, as the months passed and they continued to read through the notes of their earliest predecessors, the more they began to notice that there were inconsistencies in the tomes of old. When the scholars dared to question these missing details and contradictions, they were cast out. Their own people turned against them, declaring them heretics and driving them from the city. Even when the scholars and their loved ones escaped the city walls, their former brethren continued to hunt them, persecuting them to the farthest corners of the land. 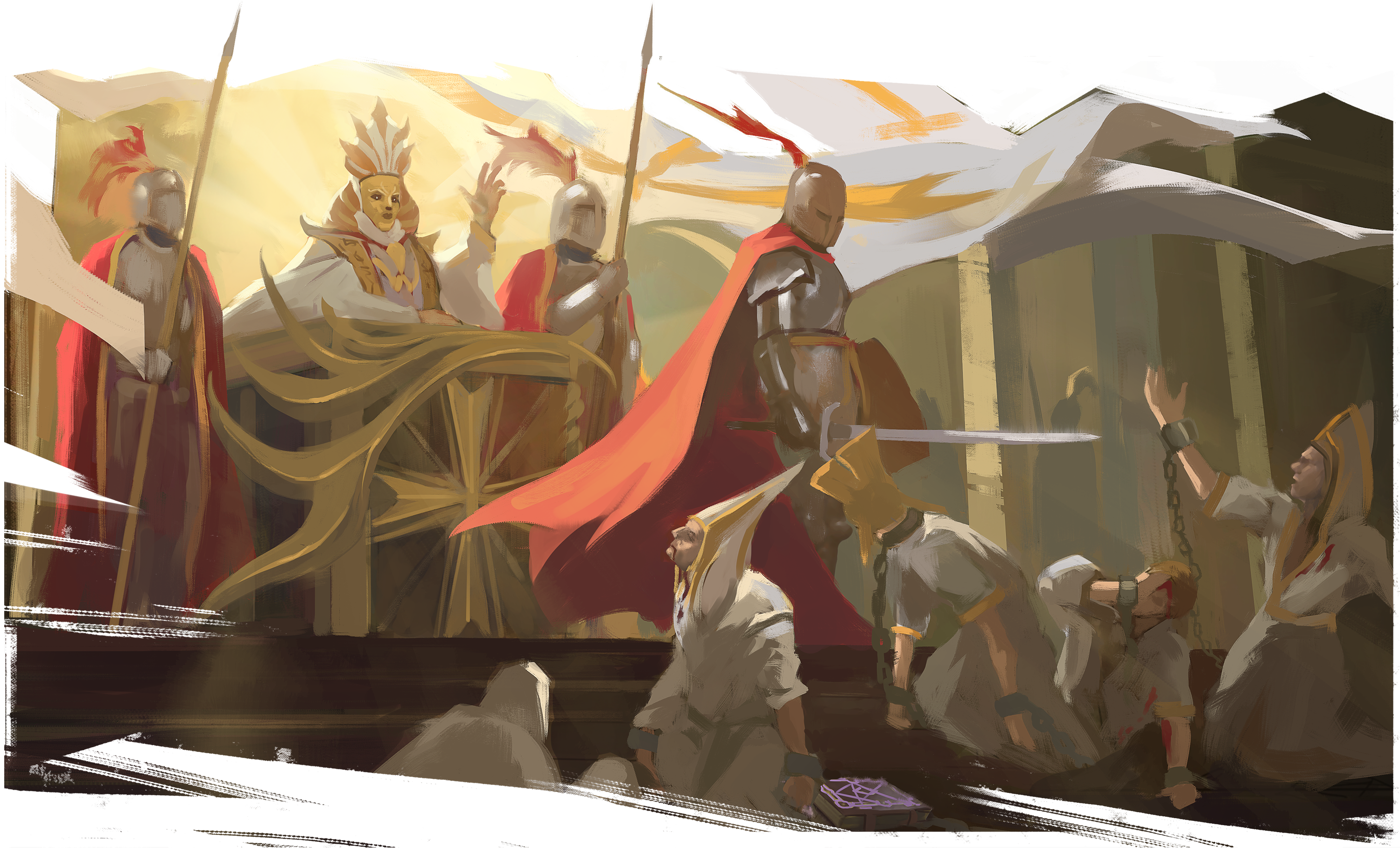 However, in their suffering, they came to discover a greater power. The pain brought them a renewed sense of purpose, opening the doorway to the Shadow, and revealing a place where the Light could not follow them; where they would be safe from persecution and death. They vowed to stand for the truth and speak out against the deceptions of the Light; to stand against the people who would silence them.

Chane was raised within the order of the Disciples of Pain. He was taught the history of humanity, the gravitas of the old ones, and the true nature of Solana. Like his brethren, he sought to harness the suffering of humanity, to welcome the bloodletting, sanctified torture, and self-flagellation which littered his own initiations into the Disciples. As his pain threshold grew higher, Chane felt his connection to the Shadow grow stronger, allowing him to see the true nature of Rathe for the very first time. In that moment of transcendence, he felt the true weight of his duty to humanity.

After his many years of study and sacrifice, Chane’s unwavering dedication was finally rewarded. Anointed an apostle of the Disciples of Pain, he had become a gifted caster and researcher, finding much solace and comradery with his fellow Disciples; together, they formed a family unified by their noble quest to free all of humanity. 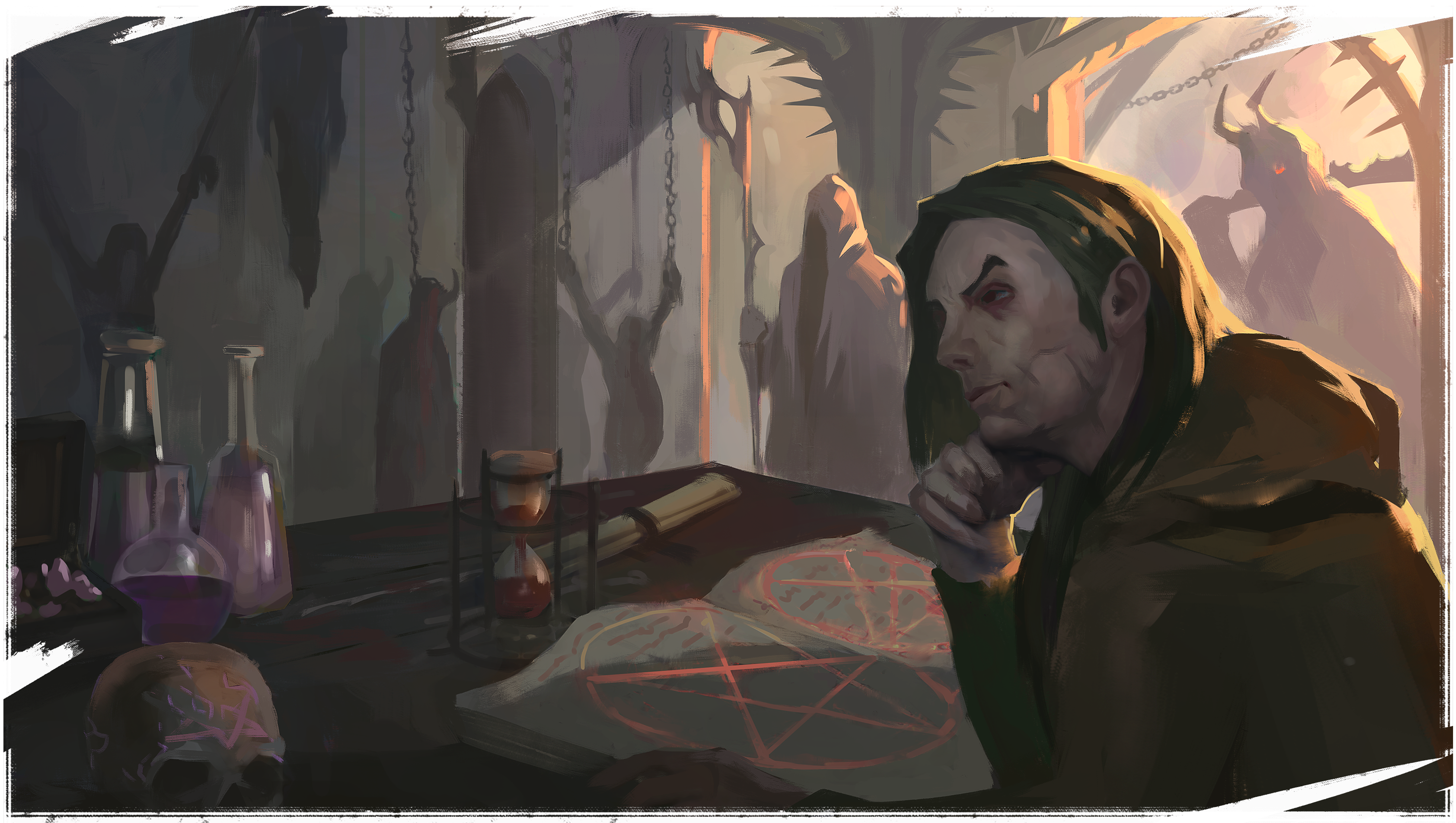 Delving into all the documents of his order, Chane read through the notes of his predecessors, searching for something which would help them turn the tide. He scoured the records and tomes of the Scriptorium, a collection centuries in the making, reading the works of not only the Disciples, but all the former residents of the Demonastery.

Time was a cruel mistress, and Chane could only watch as his reflection became ever more ashen, his failures exposed in every wrinkle. With each passing year, his quest only seemed more and more futile. His order had been searching for an answer for many years, and still lacked the answers they sought - what could Chane possibly hope to find? 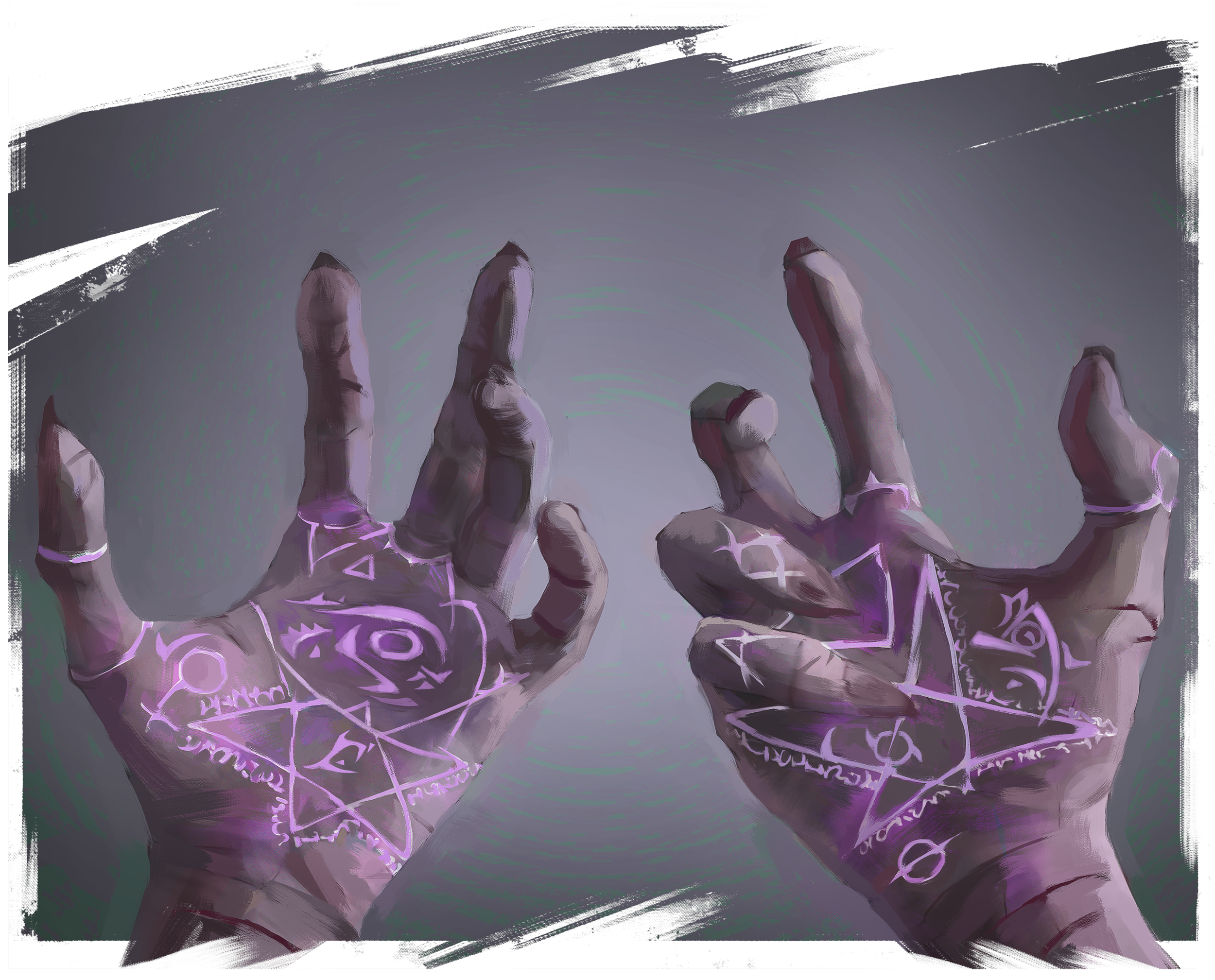 A seed of doubt began to bloom, deep within his chest—that is, until a whisper reached him through the halls of the Demonastery.

A scheme came to fruition, and word passed quickly between residents and researchers, spreading through the Disciples of Pain like a fire. All of the Demonastery rose to the unspoken challenge, prepared to take on Solana after their centuries of hibernation. When the final pieces of the puzzle had fallen into place, and a dark figure shattered the veil between the worlds, the gateway to íArathael, the eternal realm of the ancients, finally lay open. 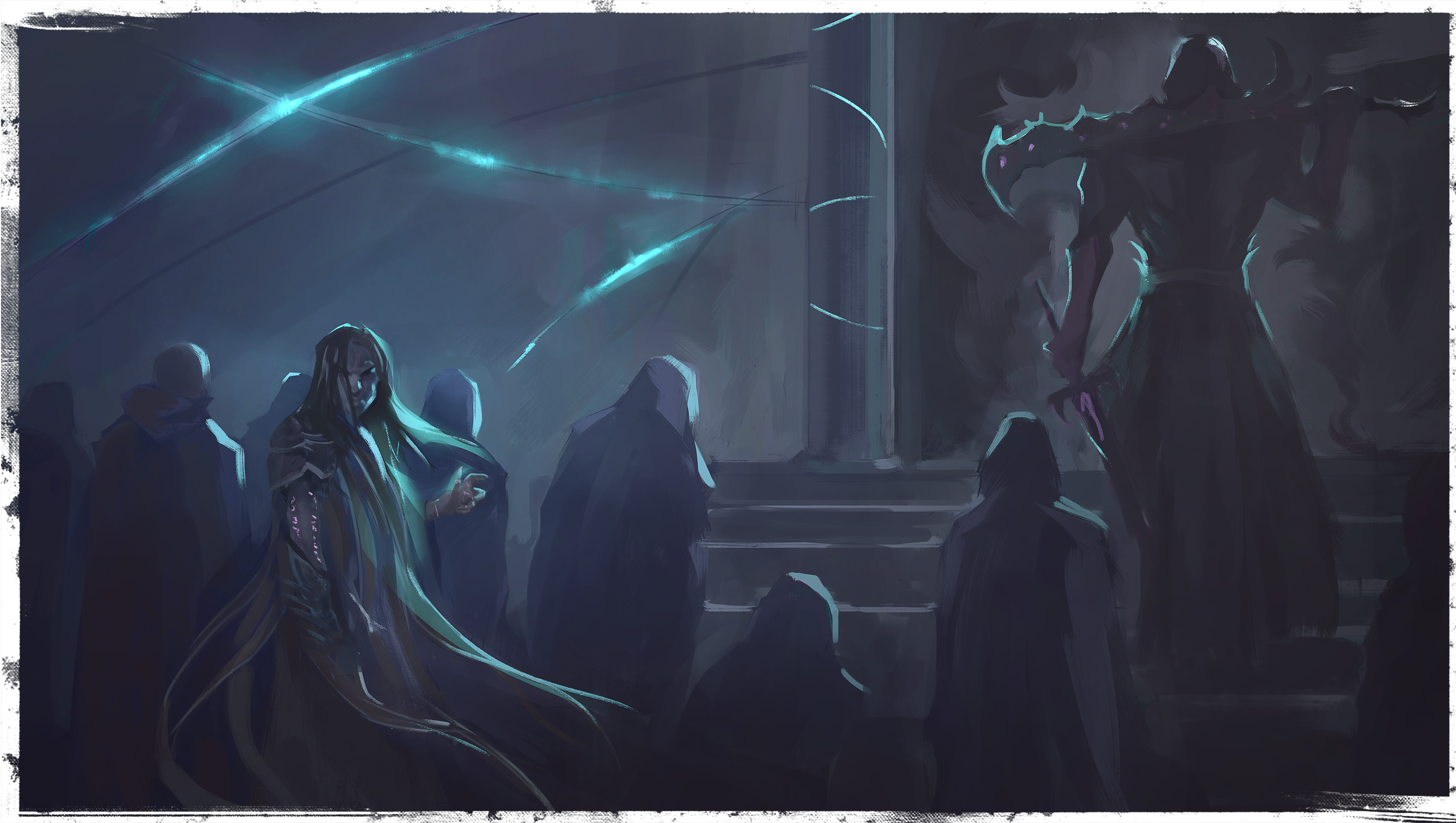 Now, at long last, they finally had the opportunity they had been waiting for. After his many years of study and solitude, Chane was prepared, and a daring new plan sprung to mind. The old ones were rumoured to be unassailable, untouchable by the hands of man. Unassailable, that is, unless the Disciples harnessed the might of the ancients for themselves, and used their own power against them.

As the Disciples ventured into the unknown world, Chane took careful note of the reports which came back, piecing together information on the ever-changing realm. The Disciples had been studying for many years, learning about the old ones, and as Chane studied their records he quickly identified one possible source of power for his order. Armed with the reports of his fellow Disciples, and with a team at his side, he grimly volunteered to venture into íArathael and locate the Embra, ancient creatures whose raw power would lead them to the victory they so desired.

When they had passed through the gateway, an unfamiliar, ethereal realm lay before them—a vivid landscape seemingly torn asunder. Rolling, verdant plains met bloodstained wastelands; iridescent wisps transformed themselves into ashen wraiths; vibrant refrains clashed with dissonant screams. The land altered itself around them with every breath; landmarks flickered in and out of existence like a mirage, as if reality itself were rippling like the surface of a lake.

Their progress through the otherworld gradually decreased as time itself slowed to a jagged crawl. A darkened sky stretched out above the wandering party, casting the colourless landscape in shades of black and grey. As they journeyed farther into íArathael, an iron cold seeped through the surrounding countryside, and the endless darkness began to weigh heavily upon their very souls. All sound around them dulled, blanketed by the oppressive silence, until finally they could not hear even the sound of their own breath.

However, rather than instilling dread, the transformation only cemented the core of Chane’s conviction; he read the Void in the blanket of shadow, in the deafening quiet, in the empty pits that yawned in their chests.

Then the darkness snuffed out the last remnants of the light, leaving them completely blind, deaf, and unable to distinguish friend from foe.

And yet, as Chane stood still, breathlessly waiting, a figure slowly appeared on the horizon.

It radiated a faint, rippling light, like the bright afterimage which accompanies a wildfire; the wisp of smoke which rises from an extinguished flame. The dim, white-violet glimmer was just barely enough for Chane to make out the form at its centre, a plume of ashen mist and wrought gold, framed by dark wings.

As the presence drew closer, Chane came face to face with the power he had sought for so long. 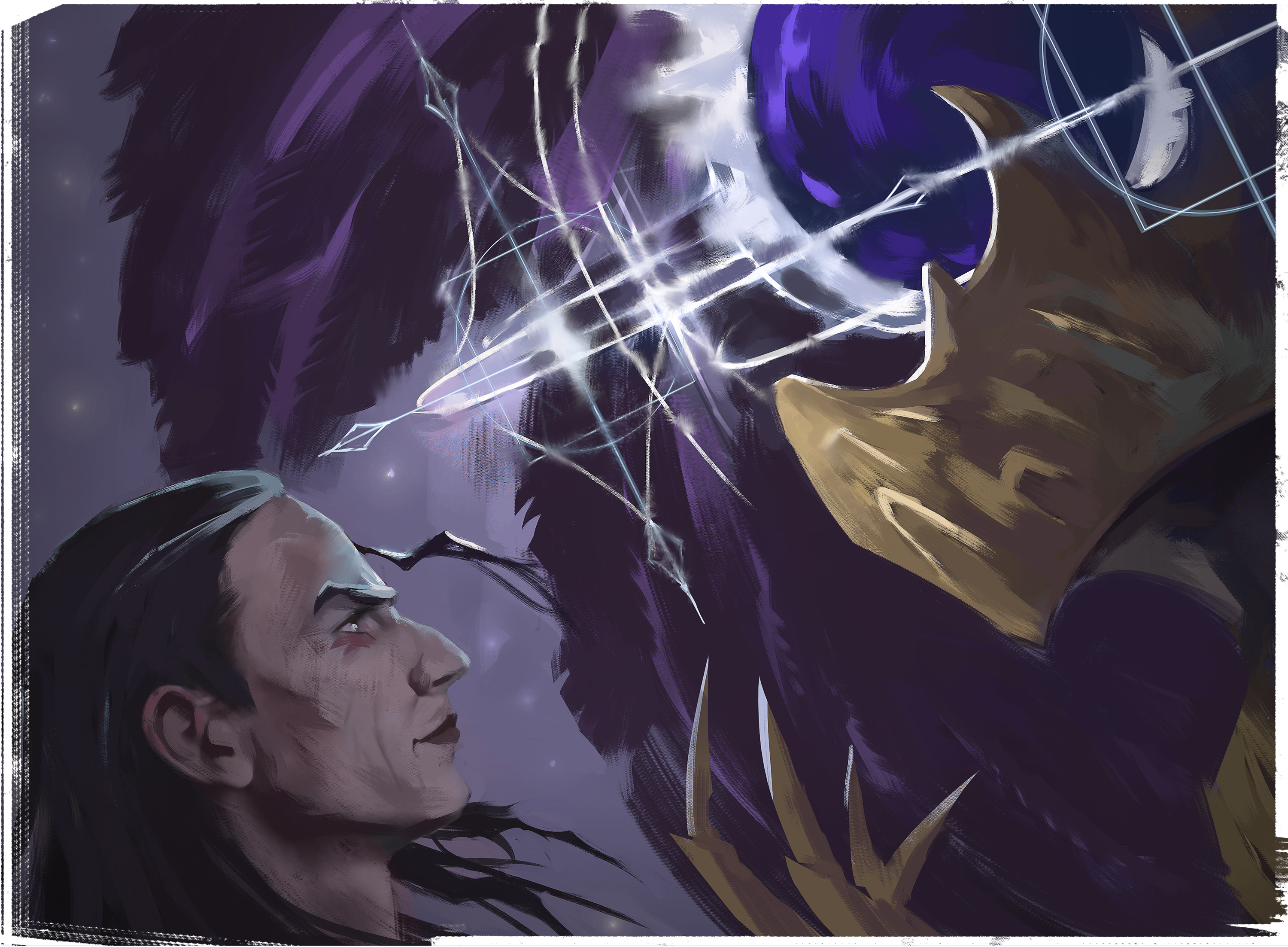 Ursur promised that power. Through him, Chane would have the power to bring his enemies to their knees, to bring the Disciples of Pain success, and to ensure that they would never again be at the mercy of Solana.

It asked for only one thing in return… Chane.

He would be bound to Ursur, a conduit for its power, and an emissary of the Void. Chane would help to grow the Shadows, and spread the darkness across Rathe. So long as he kept his side of the bargain, Ursur would provide the means for Chane to bring down the Light.

With this brand new power flowing through his veins, Chane cannot rest, cannot let down his guard for a single moment, even after returning to the Demonastery. An ominous presence now lurks within his shadow, whispering in his ear, tempting him with promises of arcane strength and the allure of forbidden knowledge.

Control is a relative concept to an entity such as Ursur, and Chane must tread carefully if he wishes to fulfil his duty to mankind. Even as he races to make the creature’s power his own, feeding and placating it with the souls of the Light, Chane walks a razor-thin line on the very edge of the Void.

One wrong move, and Chane’s own soul may be lost forever.